Peppermint bark is truly a staple item for me during the winter, right up there with hot cocoa and warm soup. Although there are several tasty store-bought versions of this classic treat, I usually like to whip up at least one homemade batch per season. In fact, I made my peppermint bark back in late December but am only first getting around to sharing the recipe and photos now. Blame my job, life, etc…

The great thing about homemade peppermint bark is that you can control the ratios of dark chocolate to white chocolate to peppermint to suit your taste. And it’s also way cheaper to make this stuff yourself than to buy it from your average retailer (though I’ll give you a little tip: Costco sells peppermint bark for a very reasonable price; the only problem is that it’s only available around the holidays). So go ahead: Make yourself a batch of peppermint bark and enjoy the fruits of your labor for several weeks to come (or days, if your self-control is similar to mine, as in non-existent). 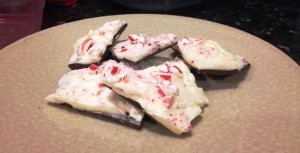 Most people’s make New Year’s resolutions to limit the amount of sweets they eat. I’ve unofficially declared the opposite—that this year, I will bake more goodies and stuff my face with yummy treats galore. (In my defense, I do spend a good part of my day running after or carrying an infant. That counts as exercise, right?)

So to kick things off on a not-so-healthy but definitely delicious note, I decided to make peppermint bark brownies. Now I have to admit that I’m a bit obsessed with peppermint bark. But the thing is, I really only tend to eat a lot of it around this time of year. After while, I like to move on to different flavors. But if I’m being honest, I’ve probably had peppermint bark in some shape or form almost every day since early December. (The fact that I made my own mega-batch right around the holidays left me with no choice, really.) And I haven’t gotten tired of it yet.

If you’re a fan of peppermint bark and like rich, dense chocolate brownies, definitely give these a try. They’re super easy to make, as they don’t require any special tools or gadgets. And they bake up quickly, which means you won’t have to wait long to enjoy the marriage of chocolate and peppermint with a nice cup of coffee or glass of milk. Yeah, you’ll probably want to go for the latter. 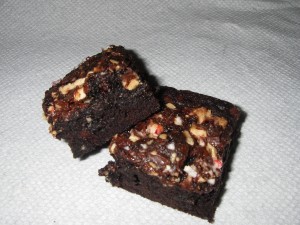 1. Preheat your oven to 350 degrees and grease an 8×8 pan.
2. Combine the butter and cocoa until well-blended.
3. Add the sugar and mix well.
4. Stir in the peppermint and vanilla extracts followed by the coffee, and mix well.
5. Stir in the flour and salt, and whisk until combined.
6. Stir in ½ cup peppermint bark.
7. Pour batter into prepared pan and top with remaining peppermint bark.
8. Bake for 22-25 minutes, or until a toothpick inserted comes out clean. Cool in pan on a wire rack.

***Don’t have peppermint bark on hand, or don’t want to spend the money on it? Here’s a tip: Trader Joe’s sells peppermint bark baking bits right around the holidays. I think I paid three bucks for a bag that made these brownies plus a generous batch of peppermint bark cookies. There’s definitely no need to spring for high-end peppermint bark to make this recipe. Another option: Instead of peppermint bark, combine equal parts chopped white chocolate, chopped dark chocolate, and crushed candy canes, mix together, and incorporate as per the instructions above.