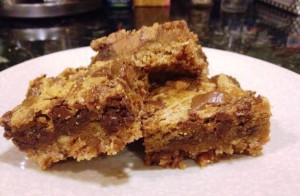 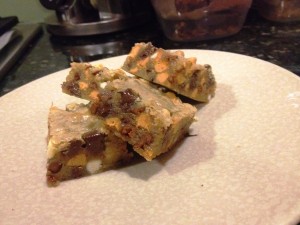 Incidentally, my work schedule recently changed (read: got more demanding) and so I haven’t been posting (or baking, for that matter) quite as regularly as I normally would. I wonder if this new schedule will have a positive effect on both my wallet and waistline…guess we’ll have to see what happens. 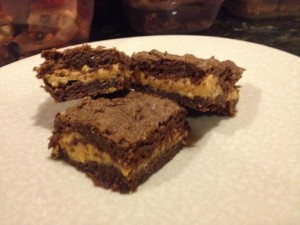 Ever have a recipe bookmarked for ages that you’re just itching to try but don’t have the time to tackle?

Such was the case with this particular cheesecake. But let me backtrack a little, only to tell you how much I love cheesecake. Whether it’s the rich and dense kind or the type that’s light and airy, put it in front of me and I’ll be sure to devour it. And then go get myself another piece. And maybe a third one after that. Yes, I like cheesecake that much. And if there’s one flavor profile I also happen to adore, it’s the vanilla and white chocolate combo. Talk about heavenly. So when I found a cheesecake recipe that incorporated several of my favorite elements into one rich, indulgent dessert, I just had to give it a try…about six months later. That’s how long this recipe has been swirling around in my mind, just begging my stomach to give in and make it. But it finally happened. And it was well worth the wait.

Now I’ll warn you: This recipe is not a quick one. There are four separate steps, though two of them are fairly simple. Usually I don’t have the luxury of making multi-layered cakes, but between my son’s birthday and the holidays, I was in such a celebratory mood that I forced myself to make the time.

What you’ve got here is a classic, simple graham cracker crust topped with a rich layer of vanilla-flavored cheesecake. On top of that is a nice helping of white chocolate mousse, followed by a generous layer of vanilla whipped cream. In other words, pure and utter deliciousness on a plate, and well worth the multi-hour investment. 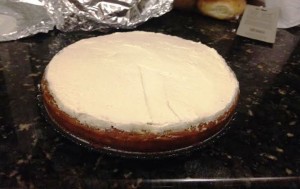 For the cheesecake layer:

For the white chocolate mousse:

For the vanilla whipped cream topping:

To make the crust:

To make the cheesecake:

To make the mousse (you can do this in advance and keep it in the fridge, or do it right before you’re ready to spread it and just chill it for a few minutes before applying to the cake):

To make the whipped cream:

Store your leftovers, if any remain, covered in the fridge. The cheesecake will keep for 2-3 days.