My mom makes the best cheesecake ever. I mean, I’ve had good cheesecake, but hers is just outstanding. In fact, my mom’s cheesecake is so good that rarely do I find myself motivated to make cheesecake myself. The only thing is that my mom is not the biggest fan of pumpkin, which means if I want pumpkin cheesecake, I either need to buy it or make it myself.

Now some people may find cheesecakes intimidating, but I can assure you that this recipe is really easy to pull off, especially if you own a stand mixer (and even you don’t, that’s okay – a hand mixer will do). I’ve actually made this cake several years but have no idea where the recipe came from (my apologies and thanks to whoever came up with it). If you’re a fan of both cheesecake and pumpkin, I definitely recommend giving this recipe a shot. 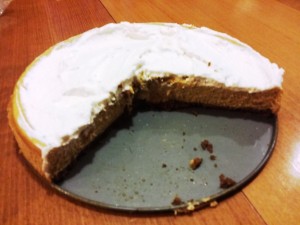