It was my dad’s birthday the other day, so I decided to whip up a cake for the occasion. There’s only one problem: My dad doesn’t eat sugar, or at least he’s not supposed to. So in reality, when I say I made this cake for my father, I really mean that I made it for his lovely coworkers, who got to enjoy the majority of it while he limited himself to a couple of small bites.

This isn’t the first time I’ve made this cake, and I have to say, this recipe is really one of my all-time favorites. The cake itself is just really flavorful and moist, so much so that I don’t even think it needs the frosting. In fact, as was the case the last time I made it, I wound up with a bunch of extra frosting, which is now sitting in my refrigerator just waiting to be incorporated into a new dessert (there are worse problems to have).

Unfortunately, the photo below really doesn’t do this recipe justice, but I wasn’t able to get a shot of the cake once it was sliced. The candy corn pieces on top, by the way, are totally optional, and in fact don’t do anything other than add a little extra color. I wanted my cake to have a bit of a festive look, but next time around I’ll definitely be skipping this step.

If there’s one pumpkin dessert recipe you’ve got to try this season, it’s this cake. Believe me, you won’t be disappointed. 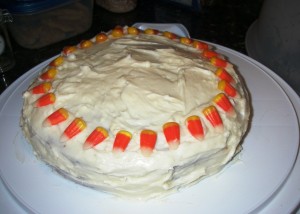 For the maple cream cheese frosting:

Two (8-ounce) packages cream cheese, softened
1 stick unsalted butter, at room temperature
2 cups confectioners sugar
1/4 cup pure maple syrup (if you have the good stuff, bust it out – it’ll be worth it)