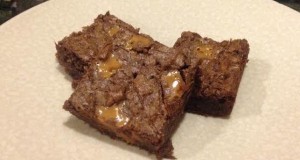 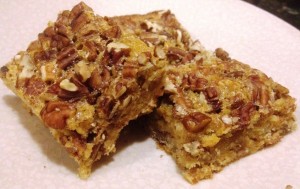 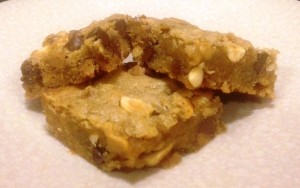 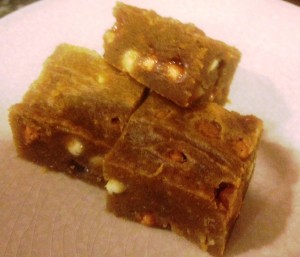 At some point I do realize this pumpkin fixation is going to have to start. After all, the holidays are almost here, at which point I may have to shift my attention toward my beloved peppermint bark. But until then, I will continue to be all about the pumpkin.

These pumpkin bars are super moist and very dense. One of the things I like about them is that they’re not super sweet – you can eat them for breakfast and not feel like you’re starting your day off with junk food. At the same time, if you prefer a sweeter bar, it’s easy enough to kick up the sugar factor by adding more white chocolate chips, and well, more sugar. Best of all, these bars are super easy to prepare, so if you’re short on time, as I tend to be, they’re a good snack to quickly throw together. 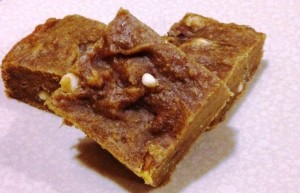 Looking for a pumpkin-infused twist on a simple, classic brownie? Try this recipe. It’s quick, easy, and very, very tasty. Plus, you can use any leftover pumpkin-caramel sauce as a topping for your next ice cream sundae. (Or, you know, just eat the remains with a spoon…) 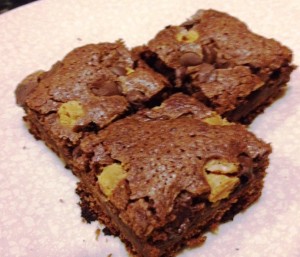 Can you tell that I’m pretty much obsessed with pumpkin?

Over the past few weeks, I’ve made pumpkin bread, pumpkin cookies, pumpkin brownies, pumpkin cheesecake, pumpkin whoopie pies, and pumpkin cake. Incidentally, I’ve also made pumpkin butter, pumpkin soup, pumpkin stew, and a host of other savory items featuring my favorite fall ingredient. But the one thing that was missing from the lineup until recently was the classic pumpkin pie.

Now don’t get me wrong – I like pumpkin pie. Love it, in fact. But this year I kind of wanted to do something different. Enter these pumpkin pie bars, which are essentially pumpkin pie taken up a notch, and in a very good way.

At a recent get-together at my place, I served these bars cold and topped them off with homemade whipped cream, and they were a huge hit. If you’re seriously into pumpkin like I am, go make these bars as soon as you have a chance. 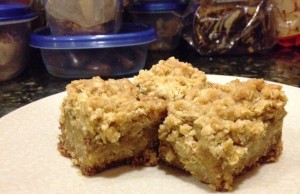 For the Oatmeal Crumb:

For the Pumpkin Pie Filling:

1. Preheat your oven to 350 degrees. Line an 8-inch square baking pan with parchment paper, allowing the excess to hang over the sides.

2. To make the crust, in a medium mixing bowl, whisk together the flour, oats, baking soda, and salt. Add both the granulated sugar and brown sugar and mix until no clumps remain. Add the melted butter and vanilla extract, then stir with a fork until the mixture is evenly moistened. Press half of the mixture into your prepared pan and bake for 15 minutes.

3. To make the filling, whisk together the granulated sugar, brown sugar, cinnamon, nutmeg, ginger, cloves and salt. Add the egg, egg yolk, and vanilla, and whisk until well blended. Whisk in the pumpkin and then the evaporated milk until the mixture is smooth and thoroughly combined.

4. When the crust has finished baking, pour the filling over the bottom crust and return it to the oven for 15 minutes. Remove it from the oven, pinch the remaining oatmeal crumb mixture into small pieces, and sprinkle it over the top of the filling.

5. Return the pan to the oven and bake for an additional 20 to 25 minutes until the top starts to brown and the center jiggles only slightly.

6. Remove the pan from the oven and allow the bars to cool to room temperature for at least 1 to 2 hours. Then, transfer the pan to the refrigerator and chill for at least 2 hours. Store leftovers covered in the fridge – they’ll keep for a few days, assuming they don’t get gobbled up first.

In my household, the colder the weather, the more frequently baked goods tend to come out of my kitchen. For a recent gathering, I whipped up these seven layer bars in addition to a host of pumpkin treats. In fact, I specifically made these so that the non-pumpkin fans in the group (blasphemy) would have something to snack on.

There are many different recipes out there for seven layer bars, and mine is probably a little different than most of the ones you’ll see.  I’ve actually done the more “classic” seven layer bar in the past and specifically wanted to try something different this time around. I think the chocolate and gingerbread crust gives these bars more of a holiday/wintertime feel. If you really want to make things interesting, you could substitute the butterscotch chips with cinnamon chips. Or, use both and call them eight layer bars.

Although these bars are quite tasty, they’re also really, really sweet. I can only eat a small piece at a time, which is saying a lot. But if you’re looking for a fun, easy recipe to try, go ahead and give this one a shot. 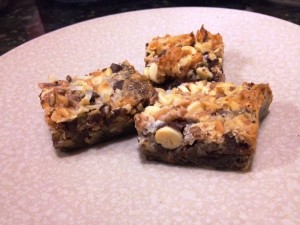